The year 2020 will bring all lovers of music, literature, drama and fine arts the great cultural festival already for the 40th time. The Smetana Days, the event bearing the name of the famous Czech personality, is the festival that has already staged great amount of remarkable art performances and during its existence has become one of the significant traditions of the city of Pilsen.

The Pilsen Philharmonic has been the organizer of the festival since 2013 and cooperates partially with other regional and national institutions on the dramaturgy of the festival.

You can look forward to the festive opening of the jubilee 40th year of the festival on 27 February 2020, when world-known violinist Nikita Boriso-Glebsky will perform together with the Hradec Králové Philharmonic. To commemorate the 250th birth anniversary of musical genius Ludwig van Beethoven, the festival will present all Beethoven´s string quartets. Many other excellent concerts are prepared as well as a rich accompanying programme that includes exhibitions, theatre performances, programmes for children and also a commemorative evening to celebrate forty years of existence of the festival. Moreover, you can look forward to the performance of the Pilsen folk ensemble Mladina and its carnival folk merry-making. A memorial act at the Bedřich Smetana Monument will commemorate the birth of this important Czech composer and his deep relationship to our city. The unifying motto of this year “From work to entertainment: Free time in the Czech culture of the 19th century“ will be reflected in many artistic projects and will also be the main theme of the interdisciplinary scientific symposium, which will be held from 20 to 22 February 2020. 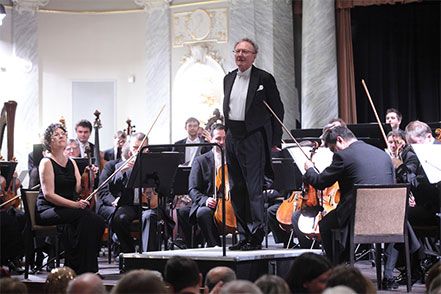 We are honoured to welcome you to another year of the Smetana Days, the musical festival that has gained the popularity with and respect of wide cultural public during its forty years´ existence.

Similarly as in the previous years you can expect genre variability, interesting dramaturgy, the connection of musical, literary, dramatical and fine arts areas. The unifiyng motto of this year “From work to entertainment: Free time in the Czech culture of the 19th century“ will be reflected in many artistic projects and will also be the main theme of the interdisciplinary scientific symposium, which will be held from 20 to 22 February 2020.

The Smetana Days festival will be opened ceremonially on 27 February 2020 with the concert of outstanding violinist Nikita Boriso-Glebsky accompanied by the Hradec Králové Philharmonic. The organizer of the whole festival is the Pilsen Philharmonic, which cooperates partially with other institutions of regional and national scope on the programme composition. Exhibitions, workshops, theatre and concert performances, in which important personalities of national and international scenes will be presented, are prepared.

The opening concert will bring wonderful artistic experience, however, the audience can also look forward to the interpretation of complete Beethoven´s string quartets, the artistic guarantor of which will be Michal Kaňka, to the violin art of Milan Al-Ashhab at the concert named Romantic Russia, or to excellent French pianist Anne Queffeléc. The performances of the ensemble Pacora trio with the Pilsen Philharmonic or of the Slovakian ensemble Balkansambel promis enjoyable musical experiences.

The JK Tyl Theatre will contribute the performances of Carmen by Georges Bizet and R.U.R. by Karel Čapek to the programme of the festival. Interesting exhibitions are prepared in the Museum of West Bohemia, the Gallery of the city of Pilsen and in the Scientific and Research Library of Pilsen Region.

Music and art bring people closer to each other, create interpersonal bonds, bring joy and break everyday stereotypes. In the spirit of these ideas we have devoted all possible care to the preparation of the programme – in the same way as in the last years – and we believe that you will find pleasure and inspiraton in our offer.